Through various staff fundraising initiatives, the firm raised £750 which has been split evenly between Bowel Cancer Isle of Man, Manx MSPCA and Age Concern Isle of Man.

“We are delighted to be able to raise this money in aid of these three local charities” said Brent Thomas, Director at Optimus, “on our Island so small, it is wonderful to meet a number of charities where people give up their own time to make a difference in other people’s lives. The money raised for these three charities have all been chosen internally by a staff member meaning that there is always a link to the charities we donate to.”

Trust Client Administrator, Rob Webb put forward Bowel Cancer Isle of Man. The charity, Chaired by Helen Norman, was established in 2009 and aims to raise awareness of bowel cancer, its symptoms and risks, and provide local support to those people in the Island affected. Around 25 people in the Isle of Man die from the disease every year, however many of these lives could be saved by early detection and treatment. 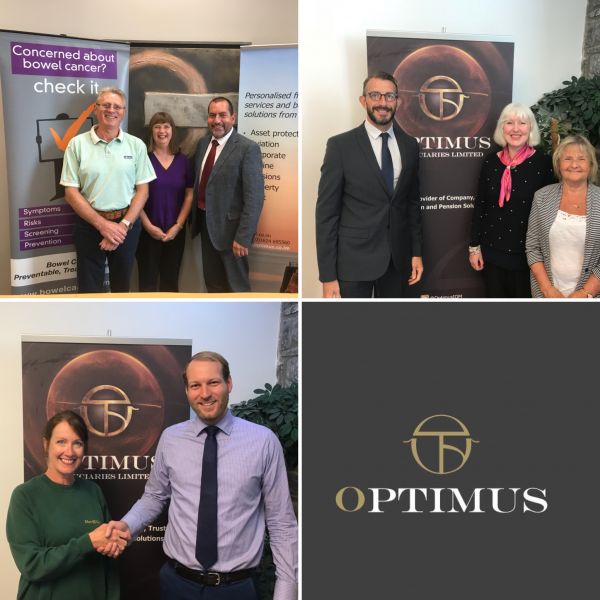 The MSPCA is a well-known and loved island charity and takes in, on average, 1600 creatures each year and that number is, sadly, rising. The staff and volunteers care for these lost, abandoned or injured creatures, restore them to health, bring back their confidence and rehabilitate them. Tracy Creer, Assistant Administrator in the Fiduciary team, put forward this charity as it was one very close to her heart, “As an animal lover, I think the work they do with helping the animals on the Isle of Man is excellent. My last two dogs and my rescue cat have all been from the charity - they will do all that it can to help an animal back to full health and find a safe new home. I love this charity”

Finally, Vicky Fletcher, Client Administrator within our Real Estate team chose Age Concern Isle of Man as her charity. A new initiative that is being rolled out by the charity here on the Isle of Man is ‘Cycling Without Age’ which will assist with isolation. The Trishaw, a specially built vehicle is an accessible, comfortable and safe solution enabling older people to be taken for a ride in the fresh air along the prom. “We have just purchased two specially built Trishaws and recruiting and training volunteer pilots” said Helen Southworth, Chief Executive of the Isle of Man branch, “We hope that it won’t be too long until we are able to take older people with limited mobility out on adventure”.

’Optimus In the Community’ continues to encourage staff to get involved and to give something back to the community and charity. Over the past 12 months, their staff have donated over £2000 to charities as well as volunteering at the Home of Rest for Old Horses with their annual Christmas Experience Event.

Industry Professional, Director
Get in touch...